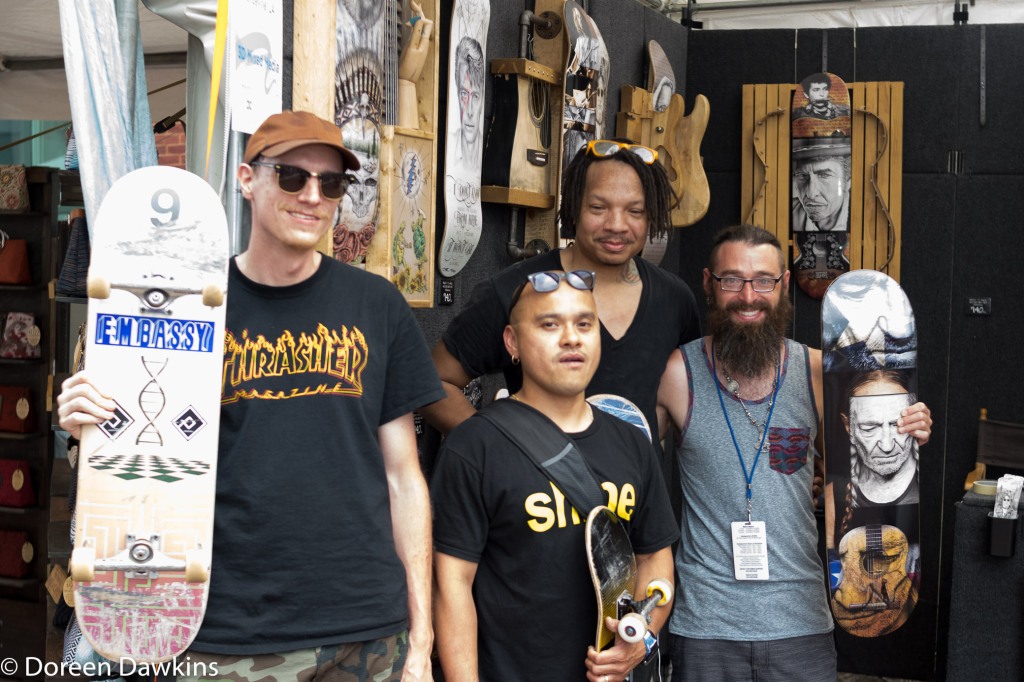 As I walked toward the Arts Festival, it was hot as fire.  A weather app on my phone said it was between 82 and 88 degrees. It felt hotter than that. Honestly, I started to wonder why I didn’t stay home.

After seeing all the people interested in Jeffrey St. Romain’s work, I knew that there were definitely some things worth seeing. It was too crowded to enter his tent, so I made a mental note to return.

Sidebar: I have never taken an art appreciation class. I recognize the talent needed to produce art but my review of any artist work, especially of specific things like technique, would be pure garbage. I just know what I think looks good or interesting.

The artists that I talked to at the festival:

He’s a local African American artist. It appeared that he had many pieces that represent the Columbus area. I love that. I was drawn to his painting “Change 4 No One”. It is a view of downtown Columbus which to me represents productivity, profession, the heart of where “it” happens so to speak. It’s important to be true to ourselves in all that we pursue.

He’s local and we have the same Father.  (My way of saying he’s a Christian). He was selling prints like hotcakes. After I waited my turn, I found him to be somewhat of a jokester. We took several takes of the picture before we settled in on the one that he wanted to use. The first picture was with him positioning his eyes the same as the picture. A riot! I went to his website and read his artist statement (http://www.codyfmiller.com/artists-statement/).  His process is inspiring!

He’s an African American artist from Atlanta, GA. Madame X (who did not want her name to be included) really enjoyed his art. She noted that it was affordable.   Unfortunately, the piece she was most interested in was sold. He describes his work as “steel fascia clad to a wood frame.”  He uses a proprietary patina process.

He’s from New Orleans, Louisiana. He does pencil drawings on skateboards. He also sells prints. He has a few different collections, including Mixed Media Assemblage Mash Up, Pop Culture, New Orleans and Other, and Music Portrait Drawings. His art reminded riding my skateboard in my teens. Also, I love music, especially piano and the Hammond B-3 organ, so I just had to take the Ray Charles Print home to add to my music room.

By the time we walked past all the tents, it started to cool down. There was a nice breeze. Before I arrived home, we had a good hard soaking rain.

My take on the Columbus Arts Festival 2018:

I would attend the Arts Festival again. I didn’t realize the Arts Festival Website has an Artist Gallery. I would suggest that, unless you are planning to make a day of it, to view the gallery online prior to attending. That way, you can be sure to visit the artists whose work you are most interested in.