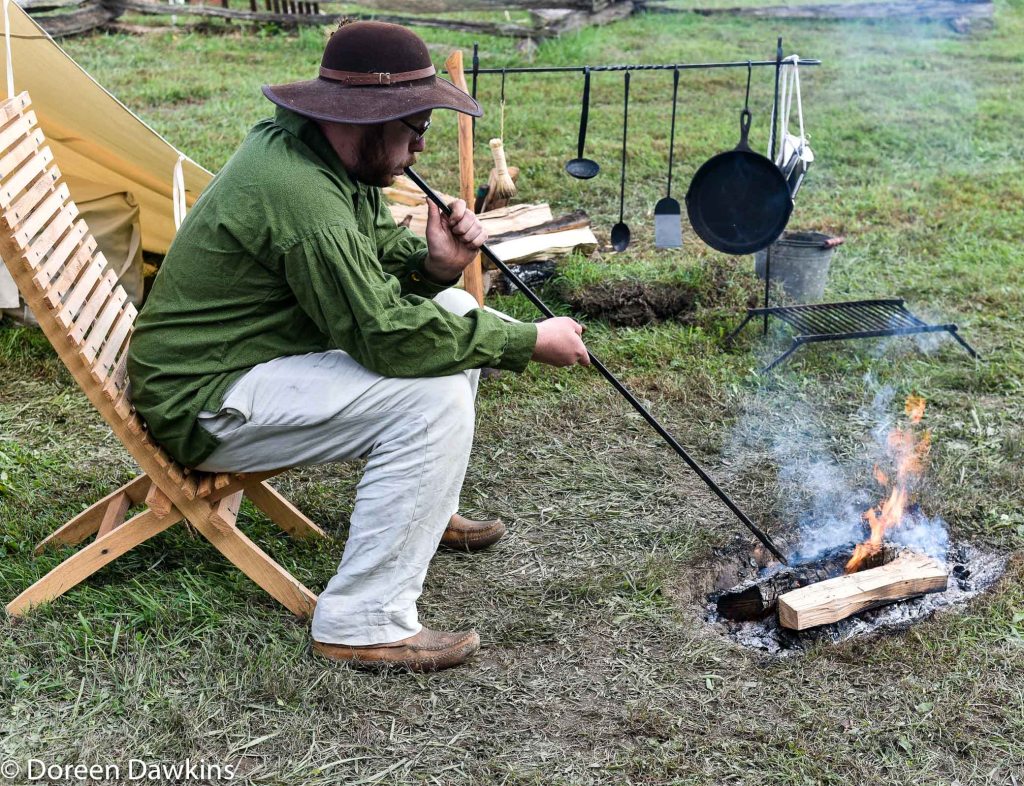 What did I walk up on?

How do people participate?

Just show up. Get a piece at a time. Get a tent, then cookware. If you see something on a blanket that means it is for sale.

We eat good. We drink good.

Why do you participate?

Over the years, you build friendship with the people who come here. We have competitions, shooting, knife, and rifle; but mostly comradery. I enjoy history and keeping the old ways alive.

We are supposed to be portraying when settlers came from out East and they were expanding into the Ohio territory. They had to bring all their home goods and everything with them. You had to find a plot of land and live in your tent until you could build a log cabin. We are supposed to be reenacting how we would all get together and form a little community, and depend on each other, and survive in the wilderness.

There are events like this that happen all during the year. There are newspapers that tell where all the events are in all the different states. They have different time periods. The ones out west are reenactments of rendezvous when the fur trappers would meet and sell their furs to the people who have come from the east. The people from the east would bring all the goods necessary, including clothing and gun parts that the trappers might need. They would have a big week-long party where everyone would come from all parts of the country to meet friends and play games and see who had not perished during the previous year. A time to trade with the Indians, fellowship and to acquire the goods that you needed.

I walked around the corner and watched the end of an archery contest.

We have been doing this since 1992. We picked the time period of the French and Indian war era, which is about the mid-1700s. I started hunting with these guns and now I am building them. I have built several guns over the years. We shoot bows, and guns. We just have a good time.

Yes, I made my whole outfit.

That makes sense. It’s not like you can just go to the store and find clothes that are period specific.

We make are own or trade for them.

Why do you participate?

I participate in living history because it is interesting. Some things are easier to do. I will show you some fire-starting methods that are a lot better than some of the modern methods, and some of the things you could buy at REI (Recreational Equipment, Inc.) or one of those outdoor stores. It takes a little practice; but it comes in handy if you get in an ice storm and lose power. Not all of history is as you see it or how it has been written. I think it was the emperor Napoleon who said, “History is written by the winners”.

Sidebar: Vince was very passionate about the history he told me. It was too detailed to include here.

We participate in this because it is fun. We can look back and say we are not ashamed to be a part of that history (the French and Indian War in the 1750’s) because not all of it was dark, ugly, vicious, and vile. If you choose a flint lock rifle, this is your period. If you choose a percussion rife, its 1830s, 1840s.

The lady of Aquitaine gave a ring to her husband. It was made as a sun dial. The outside has numbers (January, February, March, etc.). There’s a hole in it and the numbers run from 1 thru 12. For example, October and May share the same type of angle from the sun. I can tell you about what time it is (standard time not daylight savings time), and, if I shine that hole at the sun. This is like a little image of astronomy.  People knew how to navigate. They used portolan charts to navigate around the ocean. The premise is if I map the coast line accurately, and here is a big peninsula. If I start out from there and I stay on this compass heading, I will end up in South America. They didn’t worry about longitude and latitude. People knew stuff that I think we have lost.

Can you explain the process of starting a fire from back in the day?

I have a piece of steel with a lot of carbon in it, and a piece of flint which is very sharp made from limestone (which is sea shells that are compressed). I am going to strike sparks at the right angle into a piece of charred material either punky wood that has been charred or charred cloth that will catch a spark.

My take on the Harvest Moon Rendezvous 2018:

I originally came to the park for the Harvest Moon Festival. I saw what appeared to be tents through the opening in the trees. I asked a park employee if what I saw was a homeless camp. The people who participated in the event seemed very friendly. It is my understanding they live in the period starting Saturday morning and they leave around noon the next day. Their time is spent, trading, fellowshipping, and having competitions such as shooting. People seem to be passionate about history. The highlights for me were seeing the guns and outfit that Mr. Wolf made from that period, learning about the ring and how to start a fire without a match.

I’m a city woman. I have no desire to live in a tent for a day, night, or hour for that matter. I found the period specific things to be interesting. I wonder if they would issue a city woman a pass to shoot the arrows, sit around talk about old times, and taste some of the food made over a fire.

I just happened to wear my hiking boots because they matched the sweat shirt that I wore. I would suggest that you wear boots or hiking boots; because, the parking and the event are on grass. If it rains, there might be a little mud involved.