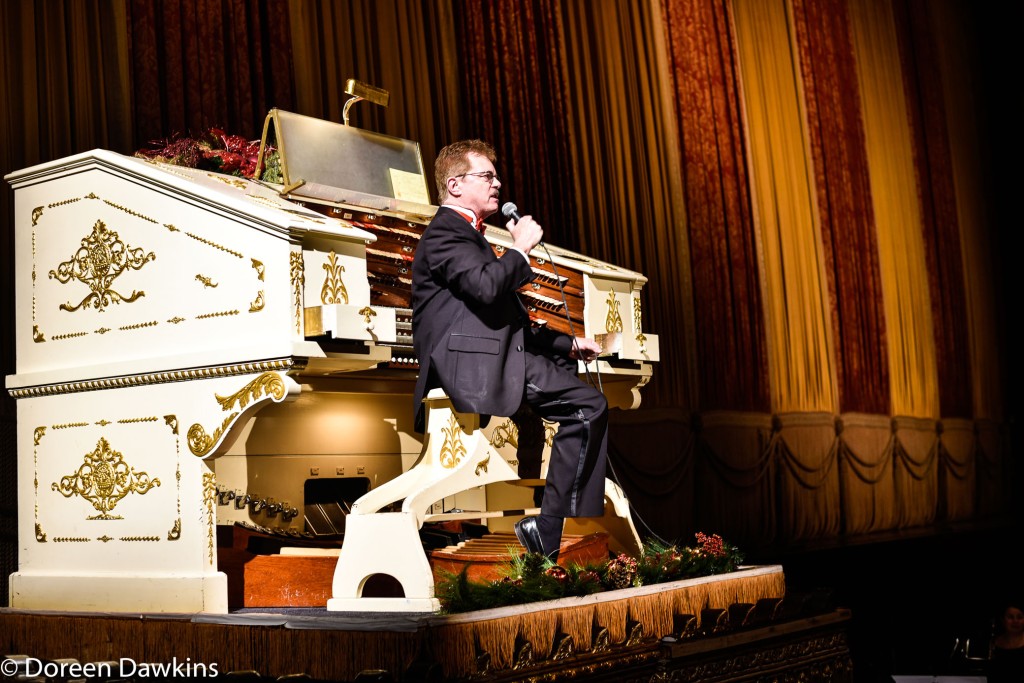 For as long as I can remember, it has been our family tradition to attend Charles Dicken’s A Christmas Carol, performed by the Nebraska Theatre Caravan, the day after Thanksgiving. I have seen the play at the Ohio Theatre, the Palace Theatre, and the Southern Theatre in the past. In my opinion, the best place to see this play is at the Ohio Theatre, mainly because of the pipe organ sing along.

How long have you been opening for “A Christmas Carol” at the Ohio Theatre?

How did you get the gig? (i.e. did you start off volunteering? Are you part of a club that plays the organ? Did the play seek you out? Did the Ohio Theatre administration recommend you to the play?)

I have been the Ohio Theatre’s Resident Organist since 1992, so this is naturally one of the things that I do in addition to the summer films, etc. I was appointed to that post after playing a solo concert on the Morton in 1992. The organ is played only by professional theatre organists for public events.

What type of organ is located at the Ohio Theatre?

A Robert Morton pipe organ. It is one of the largest that company built, and a very fine and prestigious instrument. It is internationally known.

Tell me about your music background? (i.e. did you start off in piano lessons?  Do you play other instruments? How did you transition to the type of organ you currently play?)

I started with piano lessons, church organ, the usual band in school, then theatre organ. I was at the farewell Roger Garrett concert at the Ohio Theatre in 1969 and was so taken with the organ that I wanted to play one. I had no idea that it would eventually be almost 100% of what I do – and on that very same organ.

Do you play different types of organs?

Only pipe organs – it doesn’t matter what kind.

How is the type of organ you play at the Ohio Theatre different than playing a Hammond B3 organ?

Hammonds are electric instruments. This is a high-pressure theatrical pipe organ. There is little similarity, the pipe organ being by far the grandest, most versatile and colorful of musical instruments. Possessing percussions and traps, as well as pipes that are available in thousands of combinations, these are literally a one-man orchestra. Anything the symphony can do; an organist can reproduce on an organ like the Morton.

What is your favorite type of organ to play and where is it located?

The Ohio’s Morton is certainly one! Also, the Kimball organ formerly in Milwaukee’s Oriental Theatre, and the Chicago Theatre’s Wurlitzer organ.

Do you give lessons? If not, can you give a referral?

I teach at the University of Oklahoma. Theatre organ is a private study for the most part. I know people who regularly teach based on geographical area.

Any advice for a young person to do what you do?

The solo theatre organ field is very limited, but silent picture playing is in full swing. There are only a handful of people who really understand this art form, so there is opening for young people who want to learn and perfect it as their craft. We teach the only silent film/organ scoring courses in the world at the University of Oklahoma in the organ department there.

What is your booking information?

Folks can go to my website (clarkwilson.net) for information and updates.

Sidebar: My favorite song of the sing along is the Hallelujah Chorus from Handel’s Messiah.

I love the play. I’ll just share a few of my favorite parts.

At this point in the play Scrooge is like many people, living only for himself, wanting to help no one.

At this point in the play, Scrooge is faced with everyone’s fate, death. Each year, this play reminds the audience the importance of living with the end in mind. We are here for a reason and a purpose and it is our duty to achieve that purpose.

On the ride home, we discussed the performance. My nieces were excited about the cast diversity. We all noticed the increased pace of the play. Several minutes were shaved off over the years.

My take on A Christmas Carol featuring Clark Wilson:

In my opinion, the best performance of this play was several years ago. The man who played Scrooge was retiring after many years. The toy soldier and doll performed moving dances as scene transitions. I enjoyed hearing the Hallelujah Chorus sing along at the beginning of the performance instead of during the intermission. The sing along allows the audience to interact with those who they are seated near. This is a family tradition that we plan to continue. If you are planning to park at the underground at the State House, plan to arrive about a half an hour before the show to make sure you can hear all the songs in the beginning.