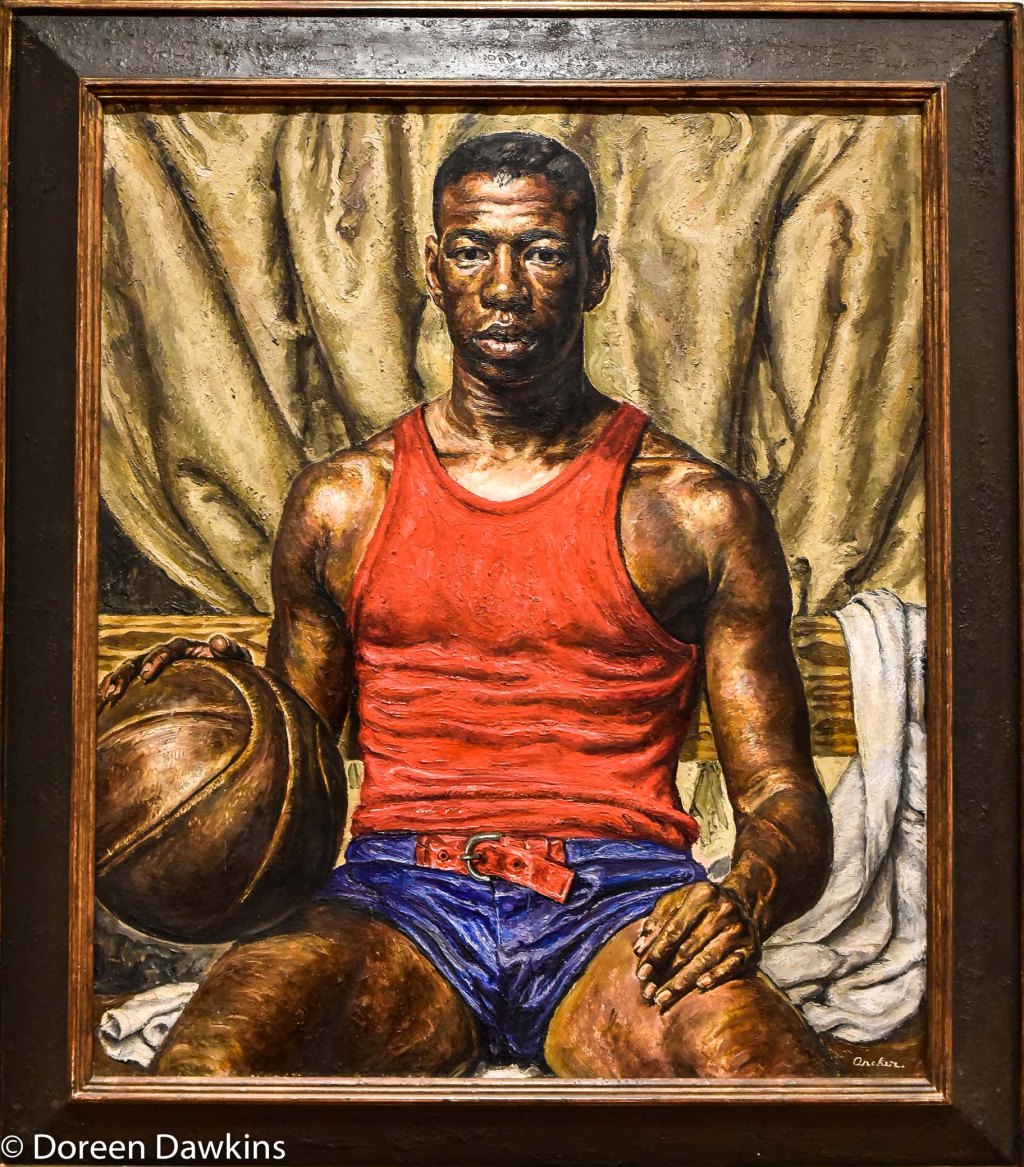 I arrived at the Columbus Museum of Art on a Sunday ready to view the exhibit. I didn’t realize admission was $6.  I joked with the woman at the desk telling her I didn’t want to pay $6 to see two items. I expected that there might be a few pieces. I was surprised to see several rooms of paintings, books, photographs, sculpture, etc. I asked a volunteer if there was a logical manner to view the art. I wanted to know if they were organized chronologically or by author. Since the art was not organized chronologically or by author, I decided to start at the furthest end from the entrance and work my way back to the front. I was quickly overwhelmed by the quantity and quality of pieces. Several hours later, I decided to concentrate only on the main pieces that drew my attention.

Sidebar: I was drawn to the pictures due to the way people of color were portrayed.

They had a monitor where you could select a portion of a few artists of the period’s music.

Sidebar: I enjoyed the unique sound.  It seemed to be orchestra driven yet soulful.

If I had not asked a volunteer her favorite and most impactful part of the exhibit, I would have missed this. I won’t comment. I will just include the pictures in the display.

A bronze statue of a dockworker. This was completed with the artist’s own money during the Great Depression.

It seemed like the artists concentrated on holiness and attending church, and heaven and hell.

In reading the description displayed next to the picture, this is his interpretation of a woman speaking in tongues at a Pentecostal Church.

Sidebar: In my opinion, it looks like most of the church attenders (congregation) is also speaking in tongues. I remember the first time I attended a Pentecostal/Apostolic Church. I noticed people speaking in tongues that was a little different and noteworthy. I can see why he concentrated on it. My first time, I was impressed with the Hammond B3 organ accompanying the choir and the dancing (called shouting in the Pentecostal/Apostolic Church). I love the Jesus Saves in the picture because that is the major point of the church.

According to the description, this painting depicts the religious commitment among black Methodists. The three dim lights represent the trinity and the skeleton hands contradict the concept of revival. Revival is a time of rededication, new conversion, and excitement.

Sidebar: Based on the darkness of the church, the dim light representing the Trinity and the skeletal hands, I think the artist is rebelling and making a statement about his church experience being the son of a Methodist minister.

My interpretation is the family and friends are praying and praising God for the young man’s recovery.

A few photographs related to church:

This is a picture of his grandmother. I was drawn to this mainly because this environmental portrait reminds me of earlier times in black culture.

Sidebar: I remember going to my great grandparents’ house as a youth. The fake fruit, the shawl, and Jesus on the cross might have been in their house. I think my parents still have a fake fruit centerpiece. We grew up with my dad mending our socks. Now if socks get a little thin, we throw them away.

According to the description, the Harlem Yankees was a semi-pro basketball team that played at a jazz club. I was drawn to this environmental portrait due to the style of the uniform and the detail of his hands and muscles developed by playing basketball.

The Lindy Hop dance was popular in dance clubs during the Swing era.

This map was created for the first issue of Manhattan Magazine and later republished in Esquire Magazine.

This exhibit not only had art and books from the Renaissance period, but also more recent artists who have been influenced by the period.  They had a case full of pieces from 1989.

My Take on I, Too Sing America: the Harlem Renaissance: Well worth the $6 admission! This really surprised me. I listed my favorite works without paying attention to the artist. It seems I really am drawn to Archibald John Motley Jr.’s work. I also enjoyed Aaron Douglas’ work and the pictures displayed in the Vernacular of the 1920s. This article would have been too long to comment on all that I enjoyed. The artists of the Harlem Renaissance pushed past the negative things to capture the positive productive aspects of life. They set the foundation for many of the artists today. The arts seemed to connect, the music, the paintings, the books, the sculptures, and dancing.